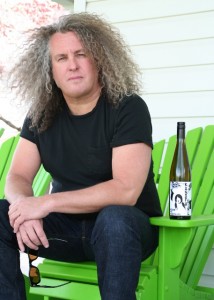 I caught up to Charles Smith at his downtown Wine Studio in Walla Walla in September. It was the wildest, most crowded place in town. These are heady times for the guy who used to be the new kid on the block. Charles grew up in Sacramento, California but he spent his formative years managing rock bands in Denmark where his passion for fine dining and finer wines began to take hold. He made his way back to the US in 1999. Mr. Smith goes to Washington State and the rest is an amazing story of success. The wine bug took over his life. During the next 14 years he will create a small wine empire that keeps getting bigger! Washington wine rocks and Charles Smith wine’s popularity is off the charts. Charles will tell you, “It’s just wine. Drink it!” That belies all the hard work he’s put in on his wines. Come in and try some. Rock out to your favorite tunes and enjoy some tasty wines.