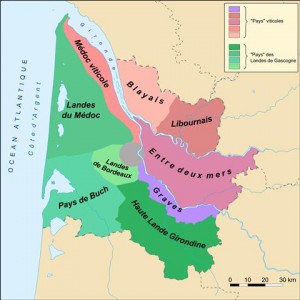 I can honestly say in the eight years I have been writing to you through this outlet, I have never really paid much attention to Bordeaux. It’s not that it isn’t a wonderful wine region but the prices for the top wines are more than scary and that business went elsewhere. Traditionally Bordeaux was the only region in France where the wines were bought and sold by numerous middlemen and the value was dubious.

That is the past. The reality now is that Bordeaux is awash in fine, family-run wineries making beautiful wines selling for great prices. Given this development and the fact that white and red blends are the hottest thing going, Bordeaux seems a perfect choice for today’s wine drinkers, the casual and the connoisseur alike. The Chateau Tour de Mirambeau wines come from an area within Bordeaux called Entre-Deux-Mers. This translates to “between two tidal rivers”. The rivers are the Garrone and the Dordogne. Between these waterways are approximately 3,700 acres of vines. The whites are blends of Sauvignon Blanc, Semillon and Muscadelle. They carry the appellation of Entre-Deux-Mers while the reds are sold under the A.O.C. Bordeaux labeling. The reds are blends of Cabernet Sauvignon, Merlot, Cabernet Franc, Petite Verdot and Malbec. The whites are crisp, herbal and citrusy while the reds offer combinations of berry, tobacco and earthy flavors. They are delicious wines for dinner, parties or whenever you need a nice glass of wine!